Our Response to COVID-19.

Legendary Arapahoe Basin Worth the Trip Over from Keystone

Visitors to Keystone during the fun-filled winter season who want to find ski lessons for their kids have good reason to look toward Arapahoe Basin as a viable alternative to the two available, but more expensive, on-site options.

Local business owner and Texas resident, Karen Fuller, told me she found the trip well worth the rental car and short travel time. She paid less for the lessons, didn’t have to buy a lift ticket and found the instructor-to-learner ratio better than what she’s seen elsewhere in Keystone.

I had a great experience. Our son Lucas got an individual lesson even though I paid for a group lesson, and the instructor was great. It was also an easy drop-off and pick-up process for the parents. I didn’t have to carry skis and boots far from the car.

Ranked the No. 2 thing to do in Keystone overall by Trip Advisor, why not consider it next time you visit the area, too?


Arapahoe Basin’s legendary slopes have been open for over 70 years. It traditionally features some of the earliest opening and closing dates in the area and includes popular vacationer hotspots like Treeline terrain park, one of the highest elevation terrain parks in North America, and Pallavicini, one of Colorado’s signature fast-and-steep ski runs.

Fuller loved it. She said both times she visited the Arapahoe Basin ski school, her child received a private lesson despite her scheduling and paying for the group one.

I know this can vary though depending on the time of year, and it may not always be the case, but both times I have gone there, my child received a private one-on-one lesson.

And while she made use of a rental car for the short drive, she said the school’s early drop-off time helped her get back to be wherever she wanted to be that day with no issue and plenty of time to enjoy it. 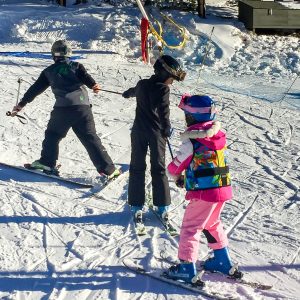 Fuller said the ski school took care of just about everything for the kids. It was easy to find parking and they even kept the beginner-level ski kids in an area where parents could watch. Heck, she didn’t even have to worry about feeding her son a lunch that day because the ski school did that, too.

In short, not only did Karen and her children end up visiting one of the most legendary ski slopes in Colorado, but she was also able to enjoy a worry-free day on her own however she saw fit to do it.

Could she have stayed near the basin for the day to catch glimpses of the kids learning their new skills? Yes.

If you are just dropping off or picking up your kids, or staying for maybe 30 minutes to watch them at the end of the day, there is a drop-off lot that is free and very close to check-in. If that lot happened to be full, there is a paid lot that is fairly close or a free lot that requires just a bit more walking. Every time I went I was able to use the drop-off parking lot.

Parents don’t have to stay. They can go ski at A-Basin or Keystone and come back at the end of the day. They could even go shopping at the Outlets in Silverthorne.

Heck, she probably could have just gone back to her condo and taken a nap if she had wanted.

And how about this fun little tidbit? According to their own website, the current A-Frame lodge in the base area on-site was originally built to test the escape capsule for the Air Force B-58 bomber.

Hey, how often does someone get to learn to ski somewhere like that?

This error message is only visible to WordPress admins


Error: API requests are being delayed. New posts will not be retrieved.

Error: API requests are being delayed for this account. New posts will not be retrieved.

Make sure this account has posts available on instagram.com.